The first frontline zone Centre for Administrative Services Provision (CASP) was presented on August 31 in Mariupol. Starting from September it will provide over 100 services to the citizens. The CASP was opened by the President of Ukraine Petro Poroshenko together with the Extraordinary and Plenipotentiary Ambassador of the USA to Ukraine Marie Yovanovitch.

The list of services provided includes administrative services (passport and ownership certificates registration), permission issue for land ownership, advertisement and construction services, services of the Ministry of Justice and the Ministry of Internal Affairs, as well as references provision (including information on accommodation waiting lists). A visa centre is about to open, so in the near future the citizens of Mariupol will be able to apply for a visa to Europe without leaving the city.

The working hours of the centre will be convenient for the citizens: 9 AM to 4 PM Monday to Saturday, on Tuesday and Thursday the working hours are prolonged until 20:00. Electronic queuing system facilitates the capacity of serving up to 1200 customers per day.

“Ten months ago a small group of enthusiasts decided to help Mariupol build a modern Centre for Services Provision. Back then it was slowly growing into fashion, the news periodically reported about the emergence of CASPs in different cities. Yet, there were none close to the frontline. We created it from scratch in a ruined office in a neighbourhood that survived shelling. Today, however, it is a presentable innovation Centre, putting people, not the system, first”, said Mustafa Nayyem, Member of Ukrainian Parliament, the founder of the Global Office community initiative.

Energy effective know-hows were integrated into the building`s design: insulated facade, steady heating input. LED lighting, ten times more cost-efficient than incandescent lamps, is used everywhere. A bank branch, children`s area and green space will be located on the premises of the Centre. The needs of the disabled people will be taken into account. Wi-fi will be available.

CASP in Mariupol is a flagship of the projects, aimed at promoting reintegration and support of the territories, adjacent to the occupied areas. The goal of these projects is to implement in Donetsk region successful reforms that proved their efficiency in other regions of the country. In the nearest future the opening of similar offices is planned in Kostyantynivka, Sloviansk, Bakhmut, Kramatorsk, Lyman and Druzhkivka.

The project was implemented in just 3 months by the city council of Mariupol with the assistance of Global Office NGO. The latter provided the design, coordination with donors and media support for the project. Mariupol Development Fund has covered costs of repairing works. Equipment and expert support was provided under the auspices of USAID, International Law Development Organization (IDLO) and International Narcotics and Law Enforcement Affairs (INL). PJSC Kyivstar organized the recruitment and training of the 48 employees of the Centre for Services Provision, having created service standards and recommendations for the use of KPI. The project was implemented with the support of the International Renaissance Foundation. The project was designed within the scope of the working group of the Ministry of Regional Development and Donetsk State Administration. 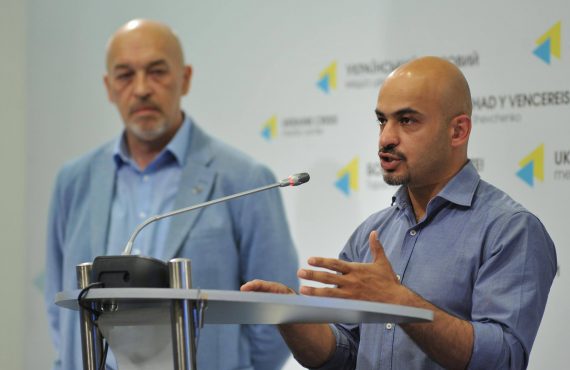